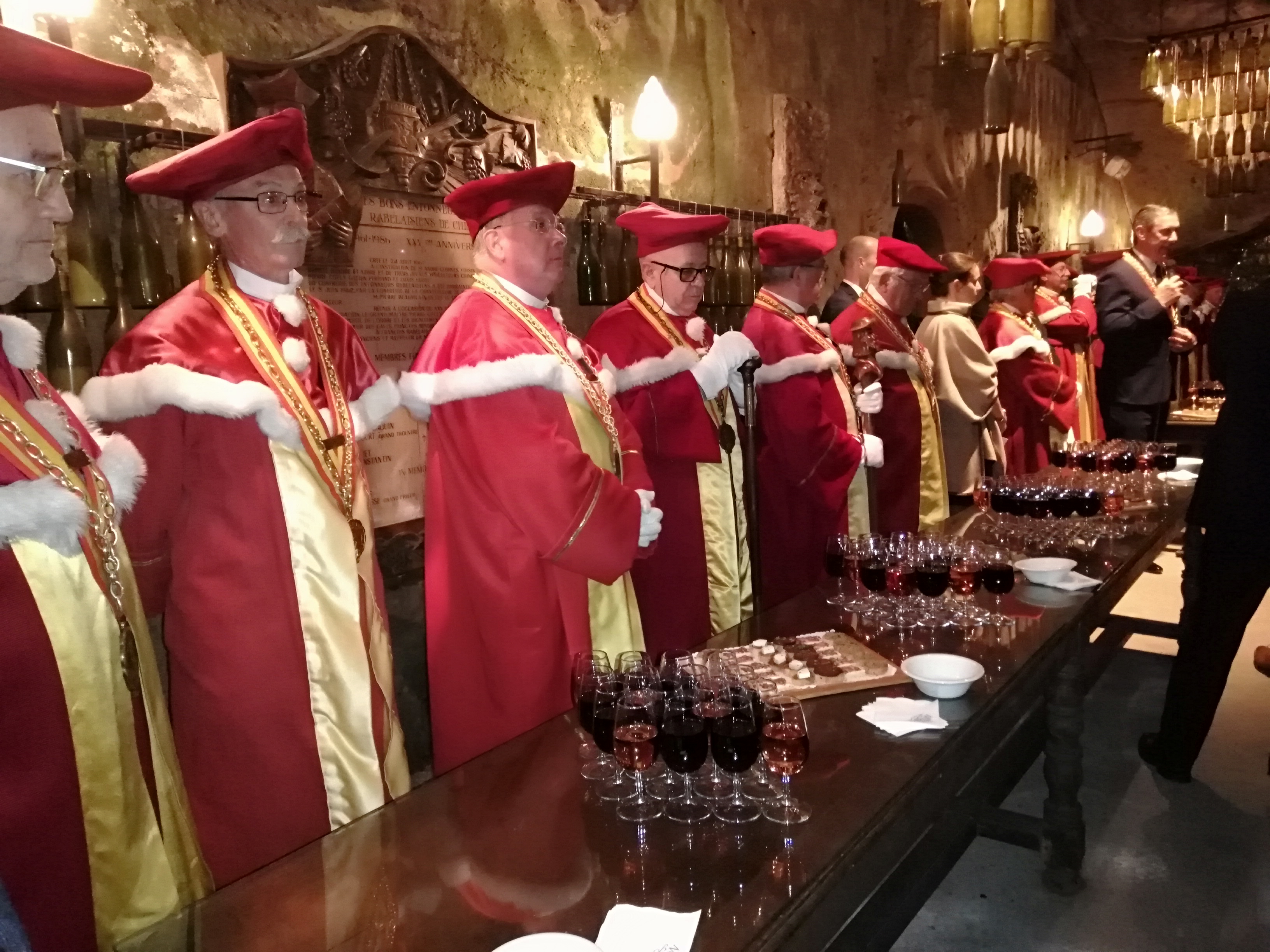 The French are serious about their wine, and none more so than the stalwarts of the Confrérie des Entonneurs Rabelaisiens–loosely translated, a brotherhood of winemakers who channel the great humanist and storyteller Rabelais. The people of the Loire Valley city of Chinon refer to the 16th-century satirist who gave us Gargantua and Pantagruel as their “spiritual father.”

The nearly 60-year-old organization has 70 active members, “mostly winegrowers but most importantly people who embrace the humanist values of Rabelais and of course his appreciation of Chinon wine,” the group’s Grand Master, Jean-Max Manceau, told Lovin’ Leonardo. They hold four chapter meetings a year, during which they create chevaliers–or knights and dames–at an annual rate of between 600 and 1,000. The most famous American to be so honored was Elizabeth Taylor in 1980.

On April 13, to celebrate the budding of the vines across the Chinon region, around three dozen people were intronisés–which literally means “enthroned” but is better understood as “inducted”–as the brotherhood’s latest disciples.

The evening, full of pomp and circumstance including trumpet fanfares and minor fireworks, was set in a series of vast troglodyte caves, the Caves Painctes, long ago quarried for the limestone that built the town and its fortifications. Welcoming guests into the cavernous venue, some two dozen red-robed officers of the confrérie stood behind tables laden with hors d’oeuvres and glasses of Chinon. After speeches from Grand Master Manceau, Chinon Mayor Jean-Luc Dupont and the evening’s presiding officer Eugenie Ferrero–all lauding the virtues of Rabelais and the wine he embraced–it was time to adjourn to the induction festivities and the grand repast of the soiree. The officers formed a sort of honor guard on either side of stairs carved into the limestone as the guests moved to the next phase.

One of the honorees was Izumi Tajiri of Japan, who flew in from Tokyo for a stay of little more than 36 hours to be dubbed a dame, jet lag be damned! Tajiri, the vice president of a pedagogical center that teaches children to develop their taste buds, lived in Chinon for many years and could be seen belting out wine-drinking songs along with the other 200 or so revelers during the lavish dinner. One was even dedicated to her, with the refrain: “She likes to laugh, she likes to drink, she likes to sing like us, yes like us, yes like us.”

The induction ceremony combined solemnity with light-heartedness, with the newbies raising their right hands and saying “I do pledge” in response to a series of injunctions, beginning with: “Declare to us loud and clear… your commitment to praising by all means available this very famous wine called Chinon.”

They also pledged to offer Chinon to all their friends, and to drink it with moderation.

Also among the revelers were pensioner Richard Packer and his wife Wendy, originally from Somerset, England. Packer became a Chinon chevalier in 2006. “I consider myself a representative of the town and the wine,” he told Lovin’ Leonardo.

In this quincentenary of Leonardo da Vinci’s death, the most obvious link to Rabelais is that both were ardent humanists. In Leonardo’s case it was expressed in art–captured notably in his Vitruvian Man placing humankind at the center of things–while with Rabelais it was his satirical writing challenging the church-centered status quo.

The two Renaissance thinkers are also celebrated for their insatiable thirst for knowledge, which Rabelais expressed as the quest for the dive bouteille, literally the divine bottle–of Chinon, of course.