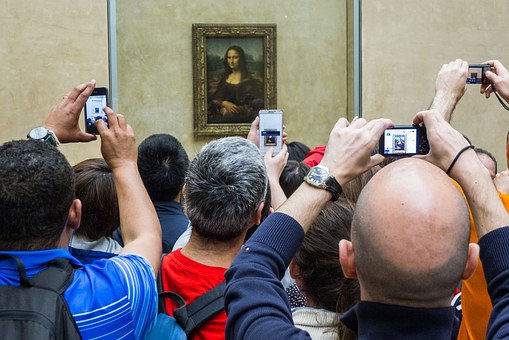 The Louvre has kicked off reservations for a blockbuster exhibition in October of most of Leonardo da Vinci’s paintings to mark the quincentennial of the Renaissance master’s death.

Tickets to the show opening on October 24 will not be available at the box office, but only on the website www.ticketlouvre.fr and in major stores.

“Because of the expected crowds, the exhibition will be accessible only by time slot as a way of ensuring the most comfortable visit,” the museum said in a statement on Monday.

“This applies to all visitors, including those with free access to the museum,” it said.

Of the some 20 extant Leonardo paintings, the Louvre has five including of course the Mona Lisa, as well as 22 drawings.

Nadia Refsi, head of the museum’s press service, told Lovin’ Leonardo that the final number of loans–of both paintings and drawings–to the ambitious show is far from established. “There’s the technical work in addition to the negotiations,” she noted.

The Mona Lisa was among three of Leonardo’s favourite paintings, the others being the Virgin and Child with Saint Anne, and Saint John the Baptist, which he brought with him to Amboise where he died 500 years ago on May 2.

Refsi also dimissed reports–notably in the British daily the Guardian–that the painting Salvatore Mundi (Savior of the World) will be excluded from the show because of doubts over its authenticity.

The work became the most expensive painting ever sold when Saudi crown prince Mohammed bin Salman bought it for $450 million at a Christie’s auction in 2017.

“We have put in a request” to borrow the work, Refsi said.

Meanwhile, although the Saudi royal reportedly planned to display the painting, a portrait of Jesus, in the Louvre Abu Dhabi, the work has disappeared from public view.

The show is expected to include nearly 120 more works–paintings, drawings, manuscripts, sculptures and other items–loaned by some of the most prestigious European and American institutions such as Britain’s Royal Collection, the British Museum, London’s National Gallery, the Pinacoteca at the Vatican, New York’s Metropolitan Museum and the Institut de France.

Negotiations for loans from Italy are still under way after hitting a snag, with the right-wing government in Rome balking at lending many of Italy’s Leonardos–including the iconic Vitruvian Man drawing–to the Louvre under an agreement reached with the previous government.

The two sides have yet to agree on a definitive list.

Paris has agreed to lend paintings by Raphael to Rome next year for that Renaissance master’s quincentennial.