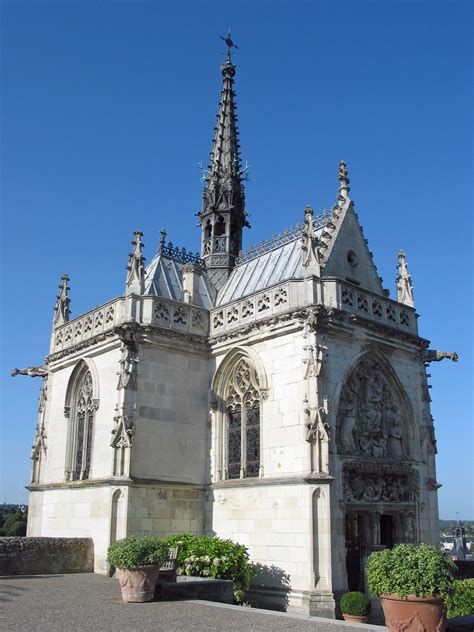 Leonardo’s “presumed” remains lie under a tombstone in the small Flamboyant Gothic chapel of Saint Hubert on the grounds of the royal chateau in Amboise on the banks of the Loire.

The tale of how the bones were lost and possibly found winds through French history from the Renaissance to the Revolution and beyond–and it has just taken a new turn, with a pair of American private collectors claiming to possess a lock of the great master’s hair. Might there be a DNA match in the offing?

Sensing that he was at death’s door, an ailing Leonardo had a will drawn up on April 23, 1519, in which he called for lavish funeral arrangements and burial in Saint Florentin, the chateau’s chapel.

Less than a decade later, Leonardo’s patron in Amboise, King Francis I, abandoned the Loire Valley for Paris and Fontainebleau. Although the chateau would once again become a royal seat, its glory days were over, and it went into decline.

Fast-forward to the French Revolution, and the vast complex was confiscated, along with other royal properties across France, by the revolutionaries, who wasted no time destroying and pillaging them. But Napoleon was keen to salvage what was left of the architectural trappings of the monarchy. At Amboise, most of the chateau complex was deemed to be beyond repair, and four-fifths of the structures were razed in 1807, including Saint Florentin–with the authorities apparently  unaware that Leonardo was buried there.

It was some 60 years later, in 1863, that an archeologist, Arsene Houssaye, discovered the bones that were subsequently interred at Saint Hubert, with plaques in French and Italian stating that they are the “presumed remains” of the Renaissance master.

Now the purported lock of Leonardo’s hair has gone on display at an exhibition in Vinci, Leonardo’s birthplace outside Florence, along with documents attesting to its French provenance.

Leonardo expert Alessandro Vezzosi told the French news agency Agence France-Presse that the lock had “remained secret for a long time before we discovered it three years ago in the United States.”

Vezzosi chose the symbolic 500th anniversary of his death to present the lock of hair as part of the “Leonardo Lives” exhibition curated with Agnese Sabato. The experts plan to research the DNA, the Renaissance specialist said.

Other comparisons are to be made with material recovered from tombs in France and Spain, he added.

“After studying Da Vinci’s genealogy for 40 years, in 2016 we presented 35 living descendants of the master, and a short time later I was contacted by the collector who owns it and who agreed to show it,” Vezzosi said.

“We are not 100 percent sure it is his hair, we are saying it is possible through genealogical research to compare the genetic material’s DNA with that of Leonardo’s living descendants who have been found in Tuscany,” Vezzosi said.

London newspaper The Guardian quoted Vezzosi and Sabato as saying the descendants came from an interrupted line running from Leonardo’s half-brother Domenico.

Eike Schmidt of the Uffizi Gallery in Florence doubts the hair is authentic.

“It is extremely unlikely that a lock of Leonardo’s hair could wind up in an American collection,” he told Italian media on May 2.

Leonardo, who was almost certainly gay, had no children but he had a dozen half-siblings on his father’s side and several more on his mother’s side.

He was born April 15, 1452, in Vinci, northwest of Florence, the illegitimate son of a wealthy landowner and a teenaged peasant.

He died May 2, 1519, at the Clos Lucé, the mansion near the royal chateau where he had lived as the guest of King Francis I.

Less than a decade later, Leonardo’s patron left the Loire Valley for Paris and Fontainebleau. Although the chateau would again become a royal seat, it gradually fell into decline.

Vezzosi said it was known that the relics presented in Vinci belonged to Houssaye, who discovered a stone coffin during the 1863 excavation.

Inside he found a skeleton whose right hand was placed behind its head along with stone fragments on which were inscribed -EO -AR -DUS -VINC- and French and Italian medals that dated from early in the reign of Francis I.

According to some accounts, the skull was exceptionally large, befitting of a genius.

The remains at St Hubert are to be left untroubled now as experts try to determine if the hair is genuine, because disturbing them “might be seen as a profanation,” Vezzosi said.

“With the living descendants and tombs of descendants we are able to make comparisons without troubling the tomb, which is a site of historical and symbolic significance to be respected,” the historian said.

Vezzosi plans to present the results of his research within a few months.

Meanwhile, an international group of scientists launched a project in 2014 to use modern technology to delve into Leonardo’s biological blueprint, notably by using DNA obtained from physical remnants of the genius including his “presumed” bones if they are granted permission to access them.

The Leonardo Project involves microbiologists, anthropologists, art historians and genealogists from France, Italy, Spain, Canada and the United States, including specialists from the J. Craig Venter Institute of California, which pioneered the sequencing of the human genome.

One approach is to explore whether fingerprints on Leonardo’s paintings, drawings and notebooks can yield DNA matching that of identified remains or of “likely” DNA relatives of Leonardo living today in Italy.

Another is the exhumation of the purported remains, a successful endeavor in England in 2015 when the bones of King Richard III were excavated from below a parking lot.

But Carol Geoffroy, who conducts guided tours of the Clos Lucé, told Lovin’ Leonardo: “It’s far from certain that the Amboise château will allow the exhumation.”