Normally they come from far and wide — the US, Japan, even Australia — but this year the punters donning boots and parkas to harvest Loire Valley grapes for the fun of it are all from France. It’s kind of eery, says Isabelle Lefevre, one of around 20 pickers at the Alain Robert vineyard on a recent Saturday. “You’re used to hearing different languages, but now you hear only French being spoken,” the 42-year-old said as France emerges from the coronavirus pandemic. While foreign tourism remains largely dormant, the French themselves are eagerly rediscovering their own country — or discovering many experiences for the first time.

The couple who drove the furthest to pick the cabernet franc grapes came from Pas de Calais, in the north of France. Another group came from northwestern France, near Mont Saint Michel, admitting they had never picked grapes before. Plenty of apples for Calvados, grinned one of them, but not grapes.

But most came from a drive of an hour or two, like the Lefevre family from Orléans, their two small boys in tow. Isabelle and husband Arnaud fled the stresses of Paris two years ago to live in the city famous for being saved from the English by Joan of Arc. From there, it is easier to seek out nature, Isabelle told Lovin’ the Loire. She is originally from the region, but this was the first wine harvest for the whole family.

The pickers huddled around the vineyard manager, Benoît Thuillier, as he explained the basics of grape harvesting, including the best posture for avoiding backache. (It’s a matter of getting down on one knee and keeping the back straight.) And Myriam demonstrated how to cup the bunches in one hand while clipping with the other. 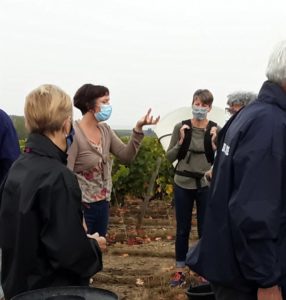 Isabelle’s children Maxence and Quentin, aged four and six, were up for the task, despite a downpour that made their glasses fog up and Maxence’s yellow anorak glisten.

Actually, the pickers were lucky to have a shot at the grapes at all, as this year’s unpredictable weather required some quick decisions and fast action on many of the plots spread over nearly 100 acres. “Normally the harvest doesn’t start before September 15,” Myriam said, adding that the vineyard scrambled to get 30 pickers into the vines starting on August 31 for the chenin blanc and chardonnay grapes used for their sparkling wines. “It was a record for us. We had to hurry because the pétillants can’t have too much sugar” — which happens when temperatures are too high for sustained periods.

Indeed, the French environment ministry says that harvests across the country took place an average of 18 days earlier than 40 years ago.

The harvest was the last of the season for the Alain Robert vineyard, which is near Vouvray, famous for its sparkling wines and bubbly crémants. It has been run by brother-and-sister duo Cyril Robert and Catherine Medard since 2014, when they took over from their parents who had run the operation for four decades. As is typical of the region, the domain’s cellar is carved out of limestone, and the three trogloydyte galleries — with their naturally cool and consistent temperature ideal for the wine — run for some 300 yards underground.

Back out in the vines, Isabelle had planned the family outing as a 41st birthday present for oenophile husband Arnaud. The harvesting was followed by a bit of grape-stomping for the kids, then a demonstration of the all-important sorting to select the best grapes. It was rounded off by the traditional workers’ lunch.

“Normally we would all be together,” Isabelle said, but because of the coronavirus the group was distributed over five tables. They enjoyed regional fare such as a “pretty hearty” tarte tourangelle with rillons, washed down of course with wine from the domain’s previous vintages.

It was all worth it for Quentin, despite the first 45 minutes or so when it rained. “I was cold in the rain, but I liked cutting the grapes,” he said. “I really liked getting in the tractor, and I drove it!”