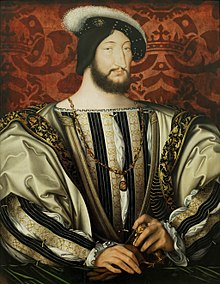 A woman is often inconstant

He who trusts her is a fool indeed.

–Francis I, according to Victor Hugo

Francis I, who reigned from 1515 to 1547, has an outsized place in France’s history. The swashbuckling king with a legendary appetite for life reveled in earthly delights as well as loftier pursuits. Francis, who rode his horse straight into battle for the conquest of Milan during the first year of his reign, was a valiant warrior. After his campaigns in the Italian peninsula, he went on to do battle with the Holy Roman Empire. He was physically outsized, too, standing well over six feet tall. For proof, go to the army museum in Paris, and gawk at the monarch’s suit of armor. He also had one of the longest noses in the kingdom. So in addition to his nicknames Warrior King and Knight King, he was called Francis of the Big Nose. But he earned his place in French hearts and minds as a great patron of arts and letters who brought the Renaissance to France–notably by hosting Leonardo da Vinci during the polymath’s declining years in the Loire Valley town of Amboise.

Considered both the “sun king of the 16th century” and France’s first modern king, Francis I dazzled with his debut, making a triumphal entry into Paris, tossing gold coins to his adoring subjects crowding the streets.

His lust for women was seemingly insatiable — he was reputed to have 27 mistresses at a time, and he regaled them with priceless presents. Francis’s contemporary Seigneur Pierre de Bourdeille de Brantôme wrote in his memoirs: “King François believed that the entire ornament of a court lay in its ladies. … For truly a court without ladies is a garden without beautiful flowers.” Brantôme, an aristocrat who became a soldier and later a biographer, added: “I myself have seen chests and wardrobes … filled with dresses which the King had given them, for fetes and great occasions, which were worth a fortune.”