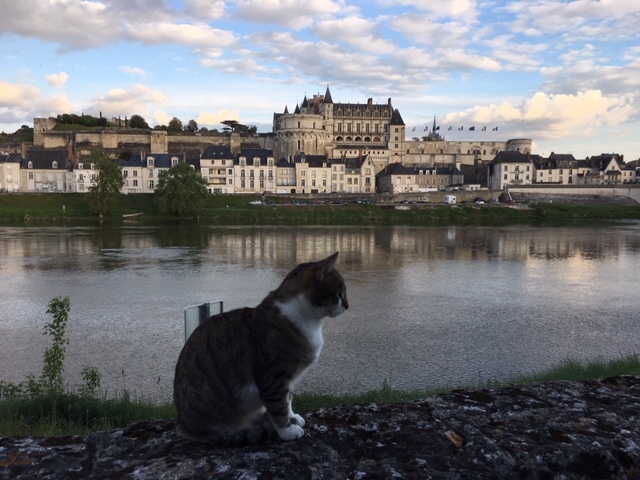 Five hundred years ago, Amboise was the seat of power and the final stomping grounds of Leonardo da Vinci. Today, the benevolent city on the banks of the Loire seduces history buffs, cyclists and wine lovers alike.

Stately plane trees line the Loire River in the middle of Amboise, throwing a canopy over the town’s lively market, an event that draws dozens of vendors and throngs of shoppers from across the Valley every Friday and Sunday morning. Small farmers, artisanal charcutiers, fishmongers and florists look for an edge over the competition, artfully presenting their wares and shouting out enticements, a chorus that grows louder as lunchtime nears.

A few steps away a graceful arched bridge ambles across the Loire, pausing to take in the view from l’Ile d’Or, an island splitting the river that makes it seem all the lazier. Standing high above on the strategic left bank promontory is the royal chateau, a monument to France’s tumultuous history as it ushered in the Renaissance. By the ramparts stands a Flamboyant Gothic chapel where Leonardo da Vinci’s remains have lain — or at least we think they are his — since the mid-19th century. (It’s a long story.)

To the French, Amboise is practically synonymous with Francis I, a king seen as the “sun king of the 16th century”. It was a role he played with gusto — some say reckless abandon — from his legendary romantic adventures to military excursions that landed him in a Spanish prison for more than a year.

But most of all, Francis I is credited with bringing the Renaissance to France, importing artists, architects and artisans whose creations he had admired in Italy during his military campaigns. Chief among his imports was da Vinci, the very embodiment of the Italian Renaissance. Then 66 and out of work, Leonardo accepted Francis’s invitation to become the French court’s “chief painter, engineer and architect,” arriving in Amboise in 1516.

The royal chateau is where Gothic met Renaissance, visible in its two main wings. The top-floor windows of one wing are of arched Gothic design, while the windows on the other flaunt the new ornate style adopted from Renaissance Italy. The chateau is also where Brittany merged with France — consummated through the marriage of Anne of Brittany to Charles VIII, two kings before Francis I but not his grandfather. (It’s a long story.) This is symbolized by the black and white Brittany flags alternating with the blue and gold French flags with their fleurs de lys fluttering over the ramparts of the chateau. The same symbols are found intertwined in the sculpted masonry inside.

The king offered Leonardo splendid lodgings in the form of the Clos Lucé, a walled mansion less than half a mile up the hill from the chateau. Today the Clos Lucé, where da Vinci died in 1519, is Amboise’s star attraction, showcasing where the beloved genius ate, slept and worked in his declining years. At the lower level are a wealth of models and maquettes of Leonardo’s inventions. Here there is the supposed entrance to a secret passageway connecting the Clos Lucé with the chateau, cut through the soft limestone, though most historians doubt that it ever existed.

Outside in the spacious grounds visitors are treated to life-sized, interactive replicas of Leonardo’s inventions including his helicopter prototype, the waterwheel and the paddleboat as well as military equipment: a circular tank and a sort of machine gun.

Nearby is a relative newcomer to the tourist circuit, the Chateau Gaillard, reopened to the public in 2014 after a painstaking renovation and the planting of gardens recalling the life’s work of Dom Pacello. The estate was the domain of the Benedictine monk who was dubbed the Leonardo of gardening, brought to France to replicate the stunning gardens the French kings saw during their adventures on the Italian peninsula. He scored many firsts in France, including introducing peach trees and the technique of growing orange trees in planters that can be moved indoors in the winter. Dom Pacello also developed the plum that is today the main thing the French remember about Francis I’s wife — the Reine Claude.

A bit out of the way but worth the visit especially if you have children in tow is the Pagode de Chanteloup, a quirky architectural “folly” that once belonged to a lavish 18th-century chateau set in a vast park. Now the “Friendship Monument” — built in 1775 as a token of gratitude by the Duke of Choiseul to friends who remained loyal to him after he was rejected from the court of Louis XV — is basically all that’s left. For a folly it is enormous, jutting nearly 150 feet into the sky, with a narrow spiral staircase winding its way up seven stories. At the top the visitor is rewarded with a panoramic view of the forest of Amboise and the Loire. The site also has a pond and picnic area, outdoor old-fashioned wooden games — skittles and puzzles, mainly — and a contemplative Chinese garden.

Speaking of panoramic views, Amboise is one of the Valley’s many jumping-off points for hot-air balloons. One launch pad is on the Ile d’Or in the middle of town, so the great, stripy balloons are a common sight in the high season.

A more down-to-earth approach is the two-wheeled one, and Amboise is at about the half-way point of a 500-mile network of bike paths up and down the Loire Valley. One of the itineraries takes you the eight miles from Amboise to the picture-perfect Renaissance chateau of Chenonceau. On your bikes!